Per Lindblad takes over as the new CEO at Landshypotek Bank. He joins the bank from SEB and will take up his post as CEO not later than 1 February.

Landshypotek Bank has a history of more than 180 years as the farmers and foresters’ own bank, but it is also making a rapid transition into becoming a broader bank. The bank has opened its doors to all savers and is now actively promoting itself in the market as a mortgage bank for homeowners.

The Board of the bank has recruited Per Lindblad as the new CEO of Landshypotek Bank.

“The Board is delighted to recruit Per as the new CEO. Per is an agronomist at heart and has lived with the industry since his childhood. His long experience of real estate and banking comprise an excellent foundation from which to lead the bank moving forward,” says Henrik Toll, Chairman of the Board of Landshypotek Bank.

Per Lindblad is leaving SEB from his post as Head of Real Estate Finance. Per has more than 20 years’ experience of real estate financing and has held various positions at and outside of SEB. In addition Per has had several positions such as CFO at a real estate corporation and as an investor in the private equity sector.

“I have worked with developing banks and real estate my entire professional life and, at the same time, I have a background and interest in farming and forestry. Landshypotek Bank represents an exciting challenge, and I look forward to leading one of Sweden’s largest niche banks through the next stage of its transition,” says Per Lindblad, incoming CEO at Landshypotek Bank.

Per Lindblad will take up his post as CEO not later than 1 February 2018. During the recruitment period, Catharina Åbjörnsson Lindgren has been Acting CEO for the bank. She will continue as the bank’s Acting CEO until Per Lindblad assumes his role. 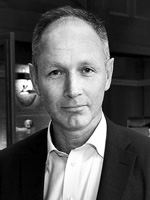 Contacts and further comments:
Henrik Toll, Chairman of the Board, via Tomas Uddin, Head of Market and Communication at Landshypotek Bank, tomas.uddin@landshypotek.se, +46 70 299 2408